Take a look at our long and fantastic history

A Look through time..

Belmont House was built, according to a date stone, in 1838 for Robert McClelland, owner of the ‘Bann Weaving Factory.’ The architect was the well-known Thomas Jackson who is believed to have been responsible for the designs of Milltown, Brookfield and Bellfield Houses. Sir Charles Brett describes it as “a fine square two-storey merchant’s mansion of horizontally rusticated golden freestone, an excellent example of the Greek revival style at its late best.” It has moulded eaves and cornice on paired console brackets and a single storey Ionic portico with fluted columns similar to those of its sister houses, Milltown and Huntly.

William Anderson, the next owner, was better known as ‘Jumbo’ due to the fact that he weighed 20 stone and was 6ft 2ins tall. He attended Banbridge Academy, then situated in Library lane, from there he went to Lurgan College and then Coleraine Academical Institution before going to Tettermall, an English public school. In his younger days he hunted with the Iveagh Harriers and the County Down Staghounds, as well as taking part in hare coursing with his greyhound ‘Sir Sankey’, of which a portrait exists and is still in the ownership of the Smyth family, Jumbo won the Waterloo Purse. Jumbo also won the Waterloo Cup which his son Brice inherited.

A Lifestyle of Decadence..

Jumbo was a keen yachtsman, winning many cups. He owned a steam yacht named the ‘Satanella’, which measured 32ft in length and he travelled extensively on it, sailing as far afield as America, Canada and the Mediterranean. When he wasn’t cruising the seven seas, the ‘Satanella’ was anchored at Bangor where Jumbo was a member of the Royal Ulster Yacht Club.

He was especially fond of Monte Carlo and from cruises in the Middle East he brought back rugs, carpets, pictures and other souvenirs, all of which would eventually end up decorating Belmont House. It was on a cruise of the Scottish Isles that he met his wife, Katherine Elizabeth Ida McNeill, who lived on the Isle of Barra and was a member of that famous clan. They married in 1901, Katherine aged 22 years and Jumbo 40 years old.

Jumbo and Katherine had four children – Katherine Ethel, Edna Rosaline (Edna) and Gwendoline Ida (Gwen). A history of twins ran on their mother’s side of the family, Katherine having had a twin sister who died at the age of 18 years. Lastly there was William Brice, who was known as Brice. 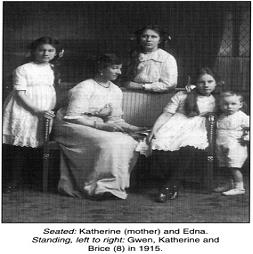 Jumbo and Katherine led a somewhat extravagant lifestyle which unfortunately was to catch up with them in the 1920s when the bank manager called to inform them to cut down on their expenses. A saying used at Brookfield was, “What we have at Brookfield they have it better at Belmont.” In the end they had little money left.
Jumbo died on 14th May 1927 and was buried on what would have been his 66th birthday, his birthday falling on 17th May, in Banbridge Municipal Cemetery.
Belmont House was sold after his death for £2,700, inclusive of 20 acres of land, to the Finney family. Gone were the days when Brookfield, Belmont and Iveagh would compete with one another to see who could grow the first asparagus of the season – something that, according to Brice, Belmont always won!
The splendid contents were auctioned including his cars, one being a 31hp, eight cylinder Cadillac, registration number IJ 90 that had been specially shipped from America. It was a seven-seater tourist car with canvas sides and top and was probably one of the first, if not the first, Cadillac in Ireland..

Brice recalled that his mother was always late and when she decided to go to Belfast, which she usually did by train, the station had to be telephoned to hold the train until Katherine arrived. One day she got Cairns the chauffeur to drive her to the city, something that proved comical. Cairns had never been there before and ended up driving behind a tram. Katherine, getting impatient, said to him: “For goodness sake Cairns, hurry up and pass that tram”, to which he replied: “Is that what it is? I’ve been waiting for it to move over.” 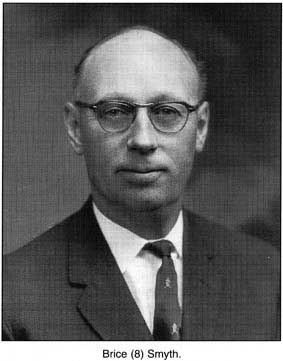 From house to hotel..

After Jumbo’s death Katherine went to live with her daughter Edna in Cheshire, eventually returning to live at Shrewsbury Gardens, Belfast. While on holiday in 1937 she became ill and died on 22nd November of the same year aged 58 years.

Brice was born on 9th February 1913, the only son of Jumbo and Katherine. Anyone visiting the Belmont Hotel today should look for a Monkey Puzzle tree at the side of the driveway. This was planted to commemorate the birth of Brice, and can be seen from the main dining room.

A lasting memory for Brice was having his appendix removed. He often delighted in showing the massive scar the operation had caused. The reason it was thought a good idea to remove children’s appendixes was due to the fact that King Edward VII’s Coronation had to be postponed as he had almost died from appendicitis.

Jumbo bought an operating table, which was set up in the dining room (across from reception -drawing room) and hired a surgeon to do the operation, the girls also being operated on. Brice recalled being told one morning to stay in bed, something he thought unusual at the time. The next thing he knew, the surgeon entered the room and knocked him out with Chloroform. When he awoke he had 10 large stitches in his side. The operation took place on 6th December and he did not get downstairs again until Christmas Day.

The architects and designers involved in the refurbishment of the Belmont Hotel, have tried to create a modern décor, but in sympathy to the original décor of Belmont House. 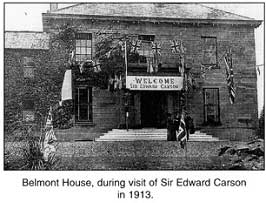 The Belmont Hotel is just 24 miles from Belfast and a 90 min drive from Dublin.

We are located conveniently close to the A1 carriageway and The Belmont Hotel is the perfect base for business and pleasure.